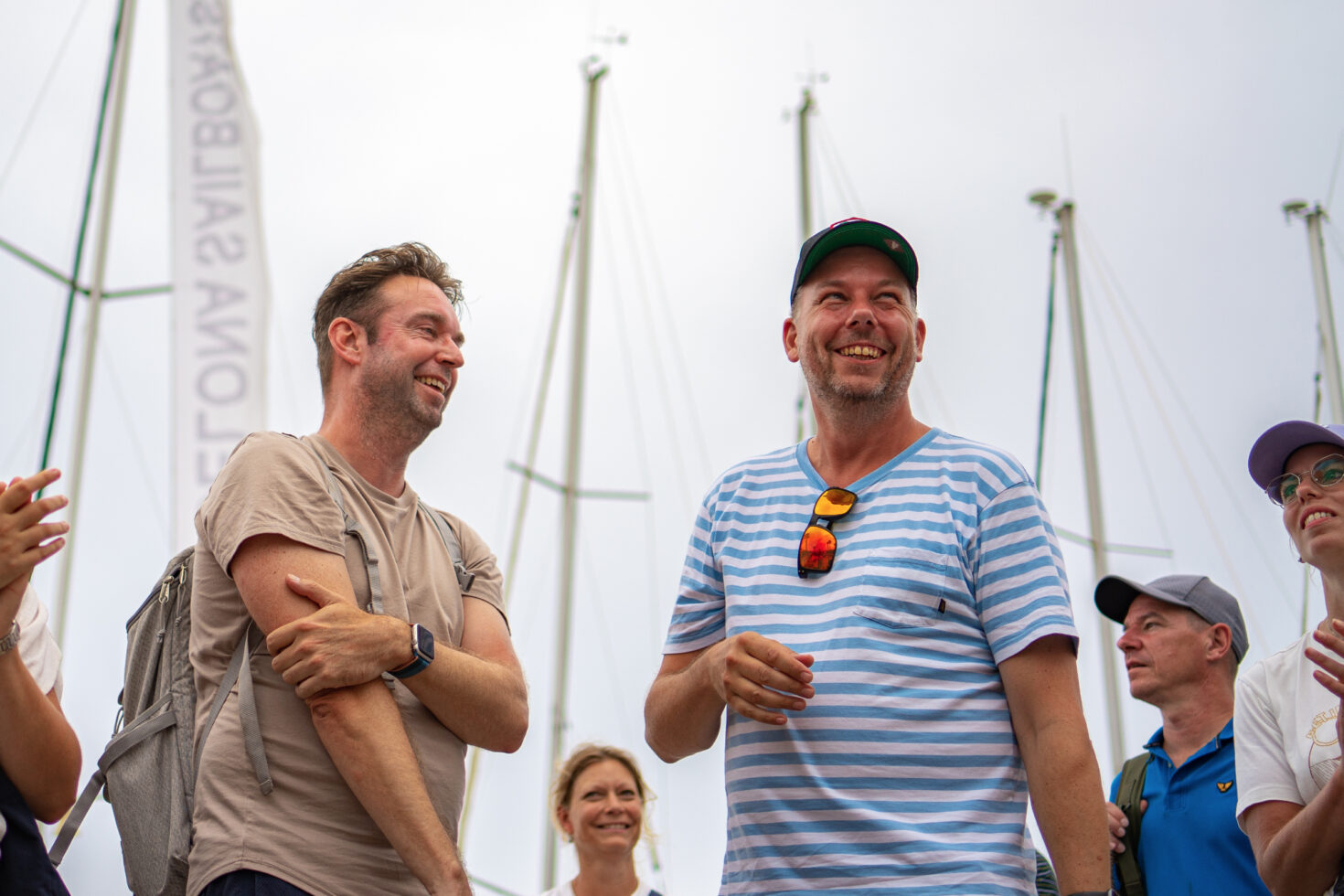 in the latest 10 years of our existence, the focus of our company shifted towards becoming experts in the Blue Yonder WMS. In these last years, our company grew faster than before and we really became an international bunch with offices all around the world. Our company events also got bigger and crazier with each iteration.

Doc and Marcy kicked off the day with a new message on the daily mixtape. And then it was time for everyone to be ready at the bus in their best team outfit. For me and Marc, it meant we could finally dress up as Doc & Marcy again which was a treat especially when it’s 30 degrees and sunny outside 😉

After everyone made teams of 2, the mini fireball was on! We kicked it off with a round of Starware Trivia on the bus and after that, it was time for the RAY-BUS assignments. You can find them all over Twitter and Instagram now and you can win some great prizes if you can solve them!

But for the people on the bus, it meant the opportunity to score a lot of points early in the race. It turned out we overestimated the capabilities of the Spanish 5G or rather Edge network a bit, as the movies took sometimes 10 minutes to arrive on Whatsapp on everyone’s phones. In the end, this only added to the suspense. 😉

In no time the bus ride of two hours was done and we arrived back where we started, in beautiful Barcelona!

The next surprise came as everyone saw their vehicles for the afternoon, the weird little yellow cars of GO CAR Barcelona.

After Patrick explained to us how to drive them, what to do and what absolutely not to do, we were ready to hit the road. The last word of advice was very useful for some of us: whenever we lost the last guide and saw the houses become smaller and the hills bigger, it was just a matter of pulling over and calling the emergency number on the side of the car. Patrick and his team have become so great at R&R missions that they usually find back everyone within 2 days nowadays. 😉

Of course, the car for me and Marc was fully covered with pink balloons and unicorns. That, together with our back-to-the-future outfits turned quite some heads in the centre of Barcelona, and random people congratulated us on our marriage. 😂

The rest of the contestants didn’t have the time for such follies as they had to perform a photo scavenger hunt and fill in all kinds of Barcelona trivia while blasting through the busy streets of Barcelona.

Luckily, there was a break halfway through Montjuic at the MNAC where we could enjoy the great views of Barcelona, and of course, entertain the tourists that wanted to take selfies with us. I even found my long-lost aunt there playing her latest repertoire!

After a fast descent of the Montjuic and the second part of the course, we ended up in a garage near the beach of Bogatell where we could park the cars. We walked 2 blocks when all of a sudden we turned a corner and were surprised to find the lovely @XXX & @XXXX of Meetnic, who prepared an incredible picnic for us in a park nearby the beach. It was a setting from a fairy tale with low tables and pillows on the ground and fantastic food and drinks. I still wonder how they all got that stuff there and made a this great pop-up location for such a big group!

During lunch, we provided everyone with seasick pills for the next event which turned out to be a great idea later on.

Next thing we knew we were walking towards the Olympic Harbour, whilst we saw waves crashing into the breakwaters near the shoreline. The wind had turned in direction and was now blowing from the sea, which caused some nice waves of around 4 to 5 meters. 😬 In the Olympic Harbour 6 ocean worthy sailing boats and their captains were awaiting us. We had to form teams, got quick instructions, and then we were off competing in a real-life regatta on the open sea! It was a real adventure and hard work, but thanks to the help of Sergio and our interim skipper Carolien we managed to win the regatta with our boat! In the second week, we became dead last but that had nothing to do with us of course. 😉

After some celebrations on the pier with some well-earned cava, it was time to go and find our home for the night.

All hotels that we stayed in were fantastic and this was no exception, the Iberostar hotel in Barcelona right on the Plaça Catalunya is by far my favourite Hotel in Barcelona from now on! We stayed there for the week in between the 2 groups so it felt a bit like our second home. But it’s really rare that a big chain hotel makes your stay feel so personal!

A great hidden feature of the hotel is the rooftop bar.  We held our final party there, so the great staff arranged super nice food, an open bar, music, and the best view of Barcelona. It was a great place to wind down and talk about all the things we did together in the past 3 days. For most of us, it felt like a 2 week holiday as we did so many different things. Marc and I got lost in time somewhere that night so we were still in our swimming gear and bathrobes when the party started, but other than having to ID ourselves to get a drink that didn’t cause any real troubles.

Of course, there was one last afterparty to attain, so we took the party people that still didn’t have enough to the Oveja Negra bar a couple of streets next to the Ramblas for some fussball and beers and ended the night in the City Hall Club around the corner.

Then it was finally time for a couple of hours of well-deserved sleep before the grand finale!