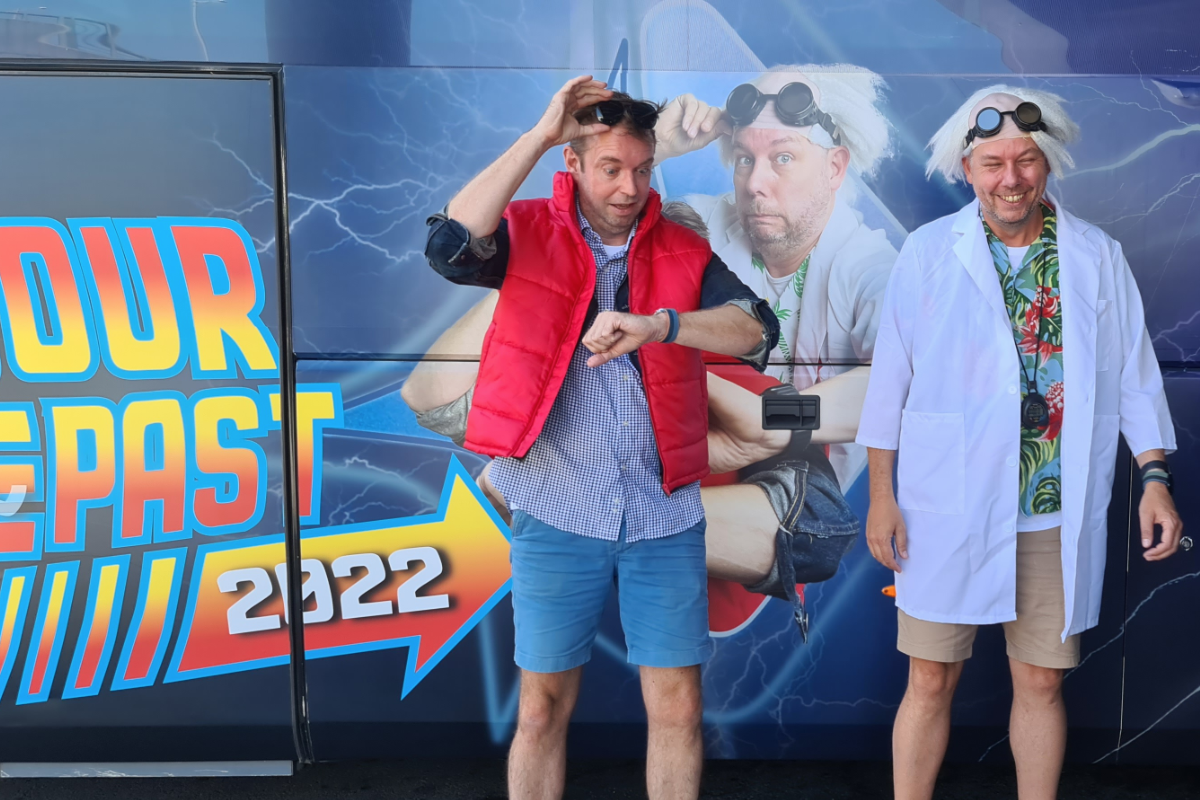 Let’s start at the beginning. Despite all the horror stories, the gods of air travel smiled upon us and both our flights went flawless, planes were on time, no one was missing and even all the luggage made it to Barcelona. The only problem was that most people were in line at 06:30 at Schiphol, so this was already looking like it was going to be a long, loooong day 😉

Our local tour guide Gertrude picked up everyone from the arrivals hall and brought everyone to the bus. Marc and I were already there hiding in our time machine for the final reveal and to welcome the crews! The looks on the faces of the people were priceless and we had to blink a couple of times ourselves before we believed what @Carmela had created together with Marketing en Acción

Random people were asking us if we belonged to a musical group or if we were actors traveling the country, but no, this was going to be our mode of transport for the next 4 days.

Once on the bus, we told our group of travelers the story of how the Starware celebrations back in the nineties consisted basically of Marc Roelofs and me staying on youth campings in this area.
As we had already hyped the camping story for days, some people were actually thinking we would go camping.

However, the girls tried to call every camping along the costa brava (really they tried at least 60 campsites) and no one would have us.
So we settled on the next best thing: a Hotel at the infamous strip of Lloret Del Mar. It was really like arriving in the 90s: all the big discos were still there, there were still kids in their teens or early 20’s partying and there there was us. 😃

We arrived at the nicest hotel in Lloret by far: HELIOS HOTEL. There we had booked a welcome party for everyone to relax a bit after such a long trip along with cocktails and DJ Haytor Gomez.

Also, humble as we are 😛 we arranged a very welcome towel for everyone to take to the next activity. As the groups were so big, at least everyone could enjoy a big hug from me and Marc for a long time to come. 😉

Then it was time for the next surprise. After we took the proper safety measures, we asked everyone to put on their swimming gear, take their towels and follow us to the beach. Once we were on the beach this monster of a catamaran that Elodie arranged with Catamaran Sensation came sailing around the corner and took us for an epic, private trip along the beautiful Costa Brava!

The boat was stocked full of food and drinks and the DJ and Sax player created the perfect vibe for an evening at sea. When we came to our destination there was ample time to dive into the crystal blue water to cool off and horse around. When the sun finally was setting the crew fired up the BBQ and we had a lovely dinner before moving back to town.

Once we got back on shore, there were two messages for the group. The first one was that breakfast was at 7:30 and that right after that we would start with some extreme activities. The second message was that the after-party started at 23:30 today 😃

Quite a large part of the group couldn’t resist the temptation and joined us to relive the days when we were young as we partied through the night in the “in”famous bars and clubs of Lloret like the Belgium cafe @Boozers, The Moef Gaga disco, and ended up in Club Tropics. The real die-hards could somewhat keep up with the cool kids in town and found their beds around 5:00 just in time for a power nap before starting the next day!